Could You Be Suffering with Tinnitus? 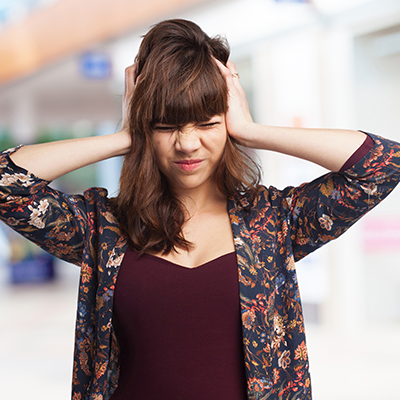 If you hear an annoying noise that never seems to go away, it can be distracting, put you on edge, and increase stress and anxiety. Because only you can hear it, you might feel like no one understands what you’re going through. But this phenomenon is very real. It’s called tinnitus and it’s a more common condition than you might think.

Below you will find topics surrounding Tinnitus, its causes, symptoms and solutions, all powered by Signia

Do I Have Tinnitus?

Are your ears ringing?

Your world is alive with sound. Laughter, unforgettable melodies, waves breaking on the shore — all these sounds enrich your life. At other times, all you want to hear is silence. So what happens when one stubborn sound won’t allow you to enjoy peace and quiet anymore?

If you hear an annoying noise that never seems to go away, it can be distracting, put you on edge, and increase stress and anxiety. Because only you can hear it, you might feel like no one understands what you’re going through. But this phenomenon is very real. It’s called tinnitus and it’s a more common condition than you might think.

Tinnitus can manifest as a ringing, buzzing, humming, or similar noise you hear even though there is no outside source for the sound. While you may have been told there is no cure, that doesn’t mean there aren’t ways to find relief and restore your peace of mind. You can learn to live with tinnitus by finding out how to control it, instead of letting it control you.

The many faces of tinnitus.

Tinnitus sounds different to everyone. It can be high or low, loud or quiet, ever-present or infrequent. And it has many possible triggers, such as damage to the ear or jaw problems.

Many people with tinnitus feel that it reduces their quality of life. And in many cases tinnitus is accompanied by hearing loss. For some, tinnitus goes away on its own. For others, it’s permanent and you have to find ways to live with its effects.

Because each person perceives tinnitus so differently, it’s important to seek professional help to find the course of action that’s best for you.

Tinnitus is not a hopeless condition.

There are many ways to effectively overcome tinnitus today. We suggest you begin this journey by learning more about what causes tinnitus, how it can affect your overall health, how to tell if you have it, and how to manage tinnitus with the help of our hearing aids.

Is your tinnitus a sign of an underlying illness?

For many patients, tinnitus is more than an annoying affliction — it may be a warning sign of an as-yet undiagnosed threat to your overall health. In some cases it may be the cause; in others the symptom. The following are just some of the serious conditions associated with tinnitus.

The combination of symptoms that are classified as Meniere’s disease include tinnitus. Those with this condition also experience bouts of dizziness and vertigo that can be debilitating, and hearing loss. To date the cause of Meniere’s disease has yet to be identified and there is no cure. Symptoms can be controlled in some by reducing salt intake, taking diuretics, and using anti-vertigo medications to manage attacks. Hearing aids can be used to treat any hearing loss.

For some tinnitus sufferers the constant humming becomes overwhelming, disturbing sleep and disrupting daily life. The constant noise can set off negative emotional and behavioral reactions that make you focus on it to the exclusion of everything else. For example, if tinnitus makes you feel stressed, you might lose interest in socializing. Acute anxiety, depression, chronic stress and similar disorders often result. These conditions may be eased by antidepressants and working with a therapist to find coping techniques. Hearing aids with tinnitus therapy features can also help by allowing you to concentrate on outside sounds. They can be used to provide relief even if you don’t have hearing loss.

TMD occurs when the jaw, jaw joint and muscles required for chewing, talking and moving the jaw do not function properly. Besides tinnitus symptoms often include toothaches and facial pain, headaches, dizziness and hearing problems. The cause may be as clear as an accident involving whiplash, grinding your teeth in your sleep or arthritis, or the reason may be more difficult to pinpoint. Treatments are available, including the following:

As you search for a solution, it’s important to remember that tinnitus is not an illness, but a symptom — similar to pain. The goal is to find relief from this symptom. Even if no specific cause is determined, tinnitus can be treated. There are many ways for you to cope with your condition, including by changing habits and attitudes so that tinnitus no longer controls your everyday life. The term tinnitus management covers various ways of adopting a new approach to tinnitus.

Since tinnitus is normally a symptom of an underlying condition, be it sensorineural hearing loss or circulatory disorder, it can only improve if the fundamental problem is treated successfully.

Some tinnitus treatment options include the following:

However, for millions of sufferers the condition causing tinnitus cannot be identified or is incurable itself. In these cases, treating the symptom directly or learning to live with the irritating sound may be the only tinnitus remedies available. The following tips can help you find relief from tinnitus:

Though the exact cause of tinnitus — as in the specific mechanism that creates these phantom sounds in some people — remains unknown, contributing factors and triggers have been identified. Excessive exposure to loud noise is often a factor because of the damage done to your auditory system. Tinnitus may also result from jaw-joint dysfunction (e.g., teeth grinding, temporomandibular joint disorder) or chronic neck muscle strain.

Not knowing the exact cause of your tinnitus doesn’t make your symptoms any less real.

Brain scans indicate increased metabolic activity in the region of the left auditory cortex in tinnitus patients, suggesting that tinnitus is not exclusively related to the ear.

Conscious and unconscious perception of sound.

Normally about 30 percent of external sounds are consciously perceived, while the rest unconsciously fade out. When this filtering function works properly, it enables you to ignore some sounds. But when it is damaged, undesired sounds can be excessively amplified.

When hearing is intensely stimulated for a long time, it can result in a residual sensory perception even though the stimulating factor is long gone. So, it’s important to have your attention distracted away from the tinnitus in order to prevent a chronic manifestation.

Tinnitus sufferers most often cite stress as the cause of their condition. While it’s true noises are perceived more acutely when you are tense, there is no scientific basis for saying stress causes tinnitus. But the reverse is definitely true — hearing a constant noise in your ears can certainly cause stress and anxiety, and even lead to depression in some cases.

Each type of tinnitus has its own cause.

The following are the four types of tinnitus and their known contributing factors:

Subjective tinnitus is the most common type and accounts for 95 percent of cases. Only you can hear it and it’s usually caused by exposure to excessive noise. It can appear suddenly and may last three months (acute) to 12 months (subacute), or longer. Subjective tinnitus is often accompanied by hearing loss due to hair cell nerve damage. The severity of symptoms varies from patient to patient, and largely depends on your reaction to the noise.

Objective tinnitus is very rare. It can be heard by a doctor either using a stethoscope or by listening very closely to your ear. It occurs rarely and may due to involuntary muscle contractions or vascular deformities. The sound is often described as pulsating and may be heard in time with your heartbeat. Objective tinnitus usually has a determinable cause and disappears when treated by surgery or other medical intervention.

Neurological tinnitus is caused by a disorder such as Meniere’s disease that affects your neurological system. It is often accompanied by dizziness, vertigo, and balance issues. Unfortunately, there is no cure yet for Meniere’s disease, but your doctor may suggest medication to combat the symptoms.

Somatic tinnitus is caused, worsened, or otherwise related to your body’s own sensory system. Sensory signals coming from various parts of the body are disrupted, causing a spasm that produces tinnitus. Those who have somatic tinnitus usually have it in only one ear. Depending on the root cause your doctor may come up with treatment options to alleviate the symptoms.

Another known cause of tinnitus is taking ototoxic (“ear poisoning”) medications. Once dosages are reduced or stopped entirely, the noises also usually disappear. But certain medicines can cause irreparable damage, resulting in hearing loss and/or permanent tinnitus.

Over 50 percent of tinnitus sufferers have hearing loss.

Research shows a frequent correlation between tinnitus and hearing loss. Because tinnitus is perceived differently by each sufferer, an exact diagnosis is essential. A doctor may conduct ENT, dental, orthodontic, and orthopedic examinations in order to establish whether a case can be medically treated or not. The pitch and volume of tinnitus can be determined by special diagnostic test, and a hearing test can reveal whether hearing loss is also involved. Treatment with hearing aids is often the first step to relief from tinnitus. Hearing aids compensate for hearing loss, which enables concentration on external sounds instead of internal noises.

Additional physical and psychological conditions have been linked to tinnitus. Continue reading through this section for more information.

Do You Have Tinnitus?

A number of articles have come out in recent years about tinnitus. You might be wondering if you have this condition, and if so what you can do about it. First, here are a few facts* you need to know:

Here is a list of questions about the phantom noise that afflicts approximately 50 million people in the US alone. Use them to help you decide whether it’s time to see a hearing care professional for a formal diagnosis. We suggest you jot down your responses for future reference.

If you answered “yes” to one or more of these questions, you might have tinnitus. Tinnitus takes different forms and its effects are unique to each sufferer. And although for most types there is no complete cure, many effective treatment options are available to alleviate your discomfort.

Besides amplifying the sounds around us, most of our hearing aids also include a tinnitus therapy feature. How does this work?

In very quiet hearing environments, regular hearing aids don’t have enough external sounds to amplify to distract you from your tinnitus. This is when the tinnitus therapy feature comes in. By emitting a customized therapy signal — a soothing sound like waves rolling into a beach — it distracts you from focusing on the ringing in your ears. Our hearing aids are equipped with different therapy signal types, including four nature-inspired ocean wave signals and five pre-programmed static sounds (e.g., white noise).

Use our customized solutions to distract you from tinnitus, so you can relax and focus on enjoying the outside world again.

Find your ideal solution for tinnitus..

Signia hearing aids offer many setting options for their tinnitus therapy feature. Your hearing care professional will help you choose the best one for your personal needs. Keep in mind that even if you don’t have hearing loss, our hearing aids can be adjusted to provide relief from tinnitus without amplification.

If you answered “yes” to one or more of these questions, you might have tinnitus. Tinnitus takes different forms and its effects are unique to each sufferer. And although for most types there is no complete cure, many effective treatment options are available to alleviate your discomfort.

Jax Audiology is your trusted source for hearing healthcare.
Call for your appointment today!
904-342-5217